I've written about this before but it doesn't seem to sink in that this sort of activity is not only criminal but so commonplace that society itself seems to support it. A story in the Toronto star tells of the availability and proliferation of the crime. The fact that the pirated media is being sold in such high quanities, high enough and with enough of a profit margin to entice business to committing the crime. is shocking enough, what's worse is that people feel there is no harm to their actions.

In several places I have worked and in social circles that I've been part of, the talk of downloading the latest movies, songs, and books has  filled the air and I have always stated my position. I am quite an insistent advocate for observing intellectual property laws, comparing the act of piracy to theft. The comparison is lost on many because they don't see the tangible side of downloading, but others simply don't care. They excuse themselves from the illegality through protesting cost of the DVDs or the trip to the theatre, yet they have a tough time accepting that they could compare their actions to performing own job for free for 20-30 hours a week. People do not understand the impact, or simply don't care.

I'm at the limit of my complacency. When I hear people talking about crime, their own, whether it's some guy on a bus talking about what he's boosted from his company or what someone has downloaded from the Internet, I cringe and often feel nauseated and wonder how long i'll be able to keep my daughters from this crime. After all if everyone does it, how do I keep them from following suit? So far, my daughters understand the concept of piracy is theft. Their early understanding is what I believe the is key to changing this problem as they will have the fortitude to stand up to others when asked for some of their MP3s, or a copy of their CD/movie. It's funny though, we're exceptions.

I have seen people give/receive pirated movies as birthday presents! This is worse than re-gifting! It's the cheapest, most tacky, aside from being illegal, present anyone could offer. My response, if it ever happened to me, hand it back. What my daughters are encouraged to give, is a Puretracks pre-paid/gift card, then the receiver can make their own CD and/or WMA file for transport. Why would I make my daughters criminals by pirating a CD for them to give to someone else? Is that being a responsible parent?

I have heard all of the arguments before and you're free to comment on the legalities of Piracy. I've debated this with others
and they generally can't provide enough support for their argument. It normally ends with their claim that it "doesn't hurt anyone" and I disagree. The one question is, what do the musicians, actors, directors, and writers do to curb the problem? Do they strike? How many people would that hurt?

Posted by Cameron Stevens at 6:12 a.m. No comments: 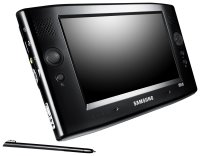 I wouldn't suggest this is the only personal computing device you'll ever need, though it will satisfy the needs of many of us as convenience when on the road. It is the new format of Ultra Mobile PC (UMPC) and it rocks!

There are a couple of these just making it to market or will be soon, my favourite (and it's on my birthday list) is the Samsung Q1. This link to Best Buy (U.S.A.) is the first I've seen online and with the Canadian dollar being so comfortably high, this is the time to buy and may be worth picking up on your next visit to the sunny south.

If you're trying to remain connected, in-touch, or simply looking for something capable but less than a full laptop, this is the toy, er, tool for you. With a 40Gb hard disk, full audio and video capabilities, and wireless features that allow quick connections anywhere, the package is a meet-the-needs solution for the traveller or business user. With on-board USB and media ports there's something there for the Photographer and the presenter too.

The biggest problem I anticipate for this pint-sized wonder is that software has become increasinging developed for larger screens and while this might pack a punch and run a full Windows XP-based OS, not Windows Mobile or Windows CE, How many applications will be problematic with this new standard.

Like a larger variation on the Sony PSP, with the freedom of running Windows applications and not requiring a specialized development platform (as is the case for Windows CE/Mobile) I can see this being popular in-office/workplace mobile tool. Especially at dealerships, service centres, doctor's offices, and other service-related situations.
Posted by Cameron Stevens at 2:02 p.m. No comments: