It certainly is here, and while it's just a toddler and an a little new to its environment, there's a wisdom in the design and the functionality that has me attached and thoroughly behind the product.

First, let me state, I was given this PlayBook by BlackBerry. I won it thanks to a twitter contest that gave me an option to attend the introduction party in Washington, D.C. and while I was unable to attend, they delivered this unit to me and asked for a review. I am going to give you an honest review.

Further disclaimers, I'm a proud Canadian, and as such have an affinity and interest in the success of RIM and the BlackBerry products, I spent some time in this device's home towns, and I can't help flying the red and while banner when I look this thing over. I'm proud of the effort and the result, as a version 1.0 tablet from a company that's made some fairly tough Smart Phones. Well, BlackBerrys were always just a little different than Smart Phones. 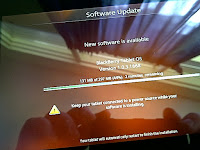 The first impression, though I'll spare you the unboxing pics, is that of a solid device, a comfortable heaviness in the hand, and a solidity that doesn't leave you feeling like you'l break it. The unit turns on right out of the box and while the microUSB charger, pouch and cleaning cloth are helpful, they're a distraction from the device. Locating the power button, a tiny thing that's easy to use, but definitely designed to prevent accident use, on the top edge of the unit beside the volume up, down, and play/pause buttons. It takes a moment to boot up from off, coming to life and getting it's bearings. It needs WiFi to get set up so make sure you have access to signal before starting. It takes you through a brief introduction, some preliminary steps and the first OS update. Expect a few of those over the next few months, as this thing gains the feedback and tweaks the ripples out of the BlackBerry tablet OS fabric. before you meet the OS itself there's a navigational tutorial that ensures you're not lost once it gets to the interface, and you're introduced the BlackBerryID because you need one to make this work. You'll use your own or create one at this time.

You're ready. The interface is simple you have five categories or buckets that contain your apps or sub-sets thereof: All, Favorites, Media, Games, BlackBerry Bridge. I spend most of my time in All, though I've started organising these better and wishing I could have defined my own buckets. You can move the apps around as you see fit and this is initiates with the touch and hold gesture. You put your finger on an app, then leave it there until they start pulsating, then they can be moved within their group, into another bucket, or deleted. The navigation of this interface (as you will have seen in the tutorial) is simple and staring an app is just a finger-tap away, it's comfortably sensitive in this respect. You can also get to the omnipresent settings menu by swiping down from the frame to the screen from the top-left corner this proves useful when needing to connect to WiFi, check the time, battery levels, and get access to settings.

The interface is simple, logical, and convenient, in fact the only miss-steps of the navigation are the odd time the device seems to decide it doesn't want to run an app, yet closing down another app will change it's mind and you're all set, or an inconsistency in the navigational quality when running an app you've found on Blackberry App World. yes, there are quite a few apps, both paid and free, and navigating these is easy.  Selecting All/Paid/Free simplifies the hunt, and the ratings are a good measure of quaility. There have been some very bright developers striving for an early position in this market. To them, well done. Personally, stick with the apps rated 3 or higher, unless you find an un-rated one in which case you're the pioneer. If you like it, go back and rate it, good developers need encouragement.

Getting on typical WiFi, what most people have at home or in travelling, easy. Getting it to work with a reasonably secure corporate network, works well too, which is better than my first experience with an iPad some months ago.

This device is ready for business... and leisure.
The BlackBerry Bridge software could be called tethering lite, but don't tell AT&T because they're very protective of their tethering data plans and we don't want them to throw a fit. I was able to download the BlackBerry Bridge software to me BlackBerry Torch (9800) and my life just got better by an order of magnitude. While the Torch has a wonderful screen and interface of it's own, the integration of the PlayBook's apps serve to make e-mail, BBM, and even file attachments usable, truly usable. When a message comes in on your BlackBerry you get notified on the PlayBook, you can access it from wherever you are through that top-left corner swipe and you're there. You can open a spreadsheet, presentation, word document and use the on-screen keyboard (which is easily hidden if you'd prefer) to make changes. I'd actually started this review on my PlayBook in Word-to-Go, part of Documents-to-Go, while riding the bus to work and it was quite easy to type, I really like the responsiveness of the keyboard!

Full tethering, providing your carrier is not as frustrating as AT&T, is easy to configure, but watch your data usage. I hate surprise phone bills. With Rogers (Canada) it was easily configured and worked well. I then turned it back off... again, surprises are unwelcome.

I run off wireless at home and at work, in fact the BlackBerry Bridge software migrated all the connections I'd configured on my Torch to the PlayBook with no re-entering of these settings aside from my Enterprise configuration which was easily added. The wireless is snappy and reliable, well - if your router is. I'll be buying a new router soon I suspect.

Pushing the "envelope" of functionality. I have tried the following browser-based tools on the PlayBook and while they are seem to work:


And they all work well. LotusLive.com's mail issue was resolved using the keyboard to "press" Enter, but everything was a great experience.
Videos play well and the videos I transferred that were XviD, MOV, or WMV worked well, some didn't and while the BlackBerry Desktop Software is happy to convert the files, it's all or nothing and when it does it, it's not necessarily as well synced. I need to play more with this and may post a follow up.
Pictures are easily transferred too, it's a simple selection process and then a "sync", as is music. Because the PlayBook is also recognised as a drive when connected (as long as you install BlackBerry Desktop Software first). You may want to look into the Wireless Connectivity but, please, set a password. I'll be playing with this more soon and do a follow-up.
What I did for my pictures was I used Picasa and created albums for the pictures I wanted to move to the device. I intentionally cropped the photos, where possible, to 16:9 and exported them directly to the PlayBook file structure, the cropping and folders created have given me the best possible experience for showcasing this device's beautiful screen. The Picture app that's included does a reasonable job at photo review and has great navigation but when applied as a picture frame lacks looping and timing adjustments. It is definitely not a photo-frame app, it's a picture viewer. This leaves room for the photo-frame apps in the BlackBerry App World, which is where it should be.
The sound quality is great on this device, and video playback is perfect. I popped in xXx, Planet Earth, and the Pilot of Dead Like Me as examples and my 16Gb device is still very happy. I don't download, I do rip, using DVD Ripper from Xilisoft (xilisoft.com) and it works best for this purpose, these same files look awesome on my PS3, PC, and XBOX360. This is now surprise that the BlackBerry PlayBook is delivery awesome, portable media.

The Cameras, yes, there are two.
I haven't play much with these as yet, but the and stills I have taken have been top-notch quality. The cameras are 5 mega-pixel (rear) and 3 mega-pixel (front), which is reasonable in this type of device.

Kobo, the eBook reader.
It's what it should be a good quality eBook reader that I can buy books for and even buy them without a credit card (in Canada too) buy buying Chapters/Indigo gift Cards. It's included, has a good interface and page-turning feel to the navigation. You can preview books (portions of them) and they are delivered to the device. I don't know what happened to Amazon.com's intent to offer a Kindle Reader, but I'd love to see my investment in Kindle Books ($0 in all fairness, though I do have the latest Kindle 3G eReader. I'll review readers later too.
How does this compare to the Apple iPad/iPad2? It's smaller, but that's not all bad. Unlike Steven Jobs, I do like the 7" form-factor. Price-wise it's very similar ($14 less than the iPad) and it does what I need better than the iPad (Flash, enterprise networking). If you are running data through your BlackBerry, you get to take advantage of the data compression and security of the BlackBerry's network design and you get BBM.
I have yet to try the HDMI out, but now that I'm certain I like the device I can budget for the Desktop Rapid Charger, miniHDMI to HDMI cable, and the case. I have ~3Gb left on this device, and once I start playing more with video and the camera I suspect I may need to upgrade to the 32Gb or 64Gb, $599 and $699 respectively. The 16Gb, $499, would go to a very lucky daughter when I get her a BlackBerry to Bridge to.
Overall, a good device, for business or personal use. It's solid, has the right features, and comes with Tetris. It also comes with Need for Speed Underground, but this was my serious review. It's the best tablet I've used and I'm happy to have it. If 16Gb is not enough, I'll by a bigger BlackBerry PlayBook, not an iPad or Android, and this is because I honestly feel it's the best device for me.
Un-boxing photos:
Posted by Cameron Stevens at 8:57 a.m.

Very Nice Blogging.Thanks to Share this Information.I got a website who are giving also Technology Services.You can also try it.