My thumbs decree, "We're back!"

Yesterday my demo unit of the Q10 arrived and while I'd hoped to make a temporary switch to the Q10 from my Z10, my daughter was too quick for me and adopted the device, but not without giving me some time with the black beauty. 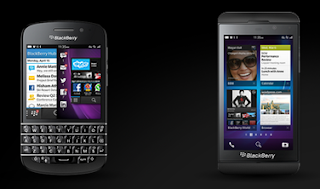 It's elegant, and roughly the same size as my work BlackBerry, the 9900 when equipped with the Otterbox Commuter. It's comfortable in the hands, with a crystal clear screen that features a 720x720 resolution. Yes, it's square, but the keyboard is a perfect fit just below, and it's an familiar old friend.

My daughter's comment was that it was weird, but qualified that by explaining that she's been in the on-screen keyboard world since April 2012, first with the BlackBerry Torch 9860, when she replaced her Torch Slider, the 9800, then on February 4th of this year when the BlackBerry Z10 came to ROGERS in Canada.


Like the Z10, the Q10 has micro-HDMI port, and you can add a microSD card to increase the storage of the device. Having just purchased a 32Gb microSD card for $20 from NCIX.ca, my device has capacity to store videos and the as many pictures as I can snap. And the BlackBerry camera is very capable in daylight and indoor photography, though low-light can be a little difficult, but this doesn't set this device behind any other. If you're documenting or capturing the impromptu moments of life, it'll so. Raise the bar with HDR pictures, but switch to a rapid shot mode for those family events.

The device is solid, feels great in the hand and a tough as you'd expect from a BlackBerry, not that I've drop-tested it. I promised my daughter a 1 month review period, after that I'll find a good home for it, or perhaps try it myself, but I do love my Z10.

Maybe BlackBerry will have something new to try by then, but from what I've seen this is the second a bright future of devices from my friends in Waterloo, Ontario.
Posted by Cameron Stevens at 1:05 p.m. 1 comment: